This is an INVESTIGATIONAL MEDICAL DEVICE being evaluated for use in hospital setting during extreme crisis leading to ventilator shortages.

It has not been approved by any regulatory body.

It has significant potential for causing harm even in the hands of skilled and experienced clinicians. Any clinical application requires close monitoring.

It is posted here in order to facilitate rapid knowledge sharing and research on strategies for addressing the global ventilator shortage during pandemics.

Any of use of this device is done purely at your own risk and liability. The developers and associated institutions do not accept any liability for its use. 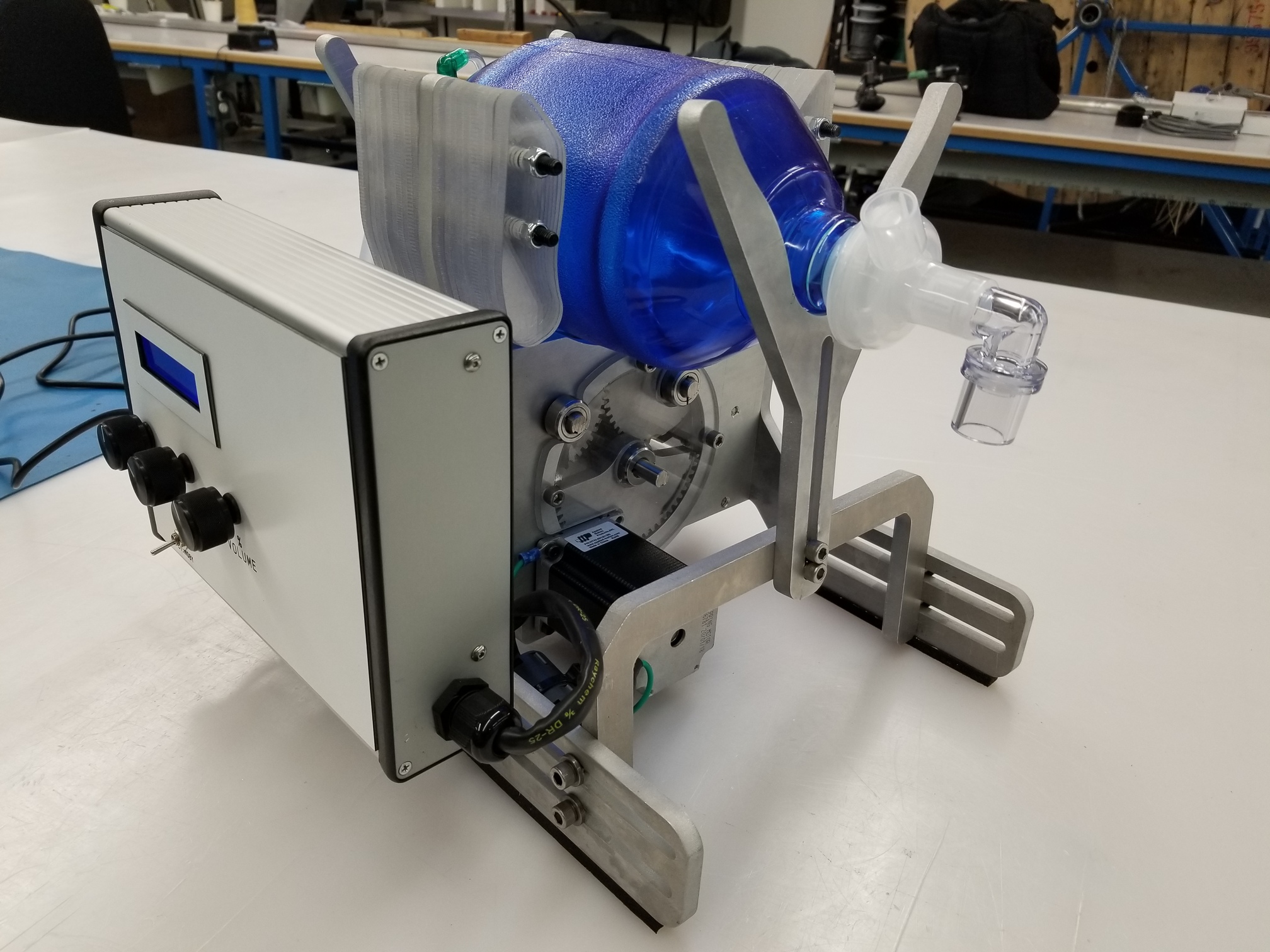 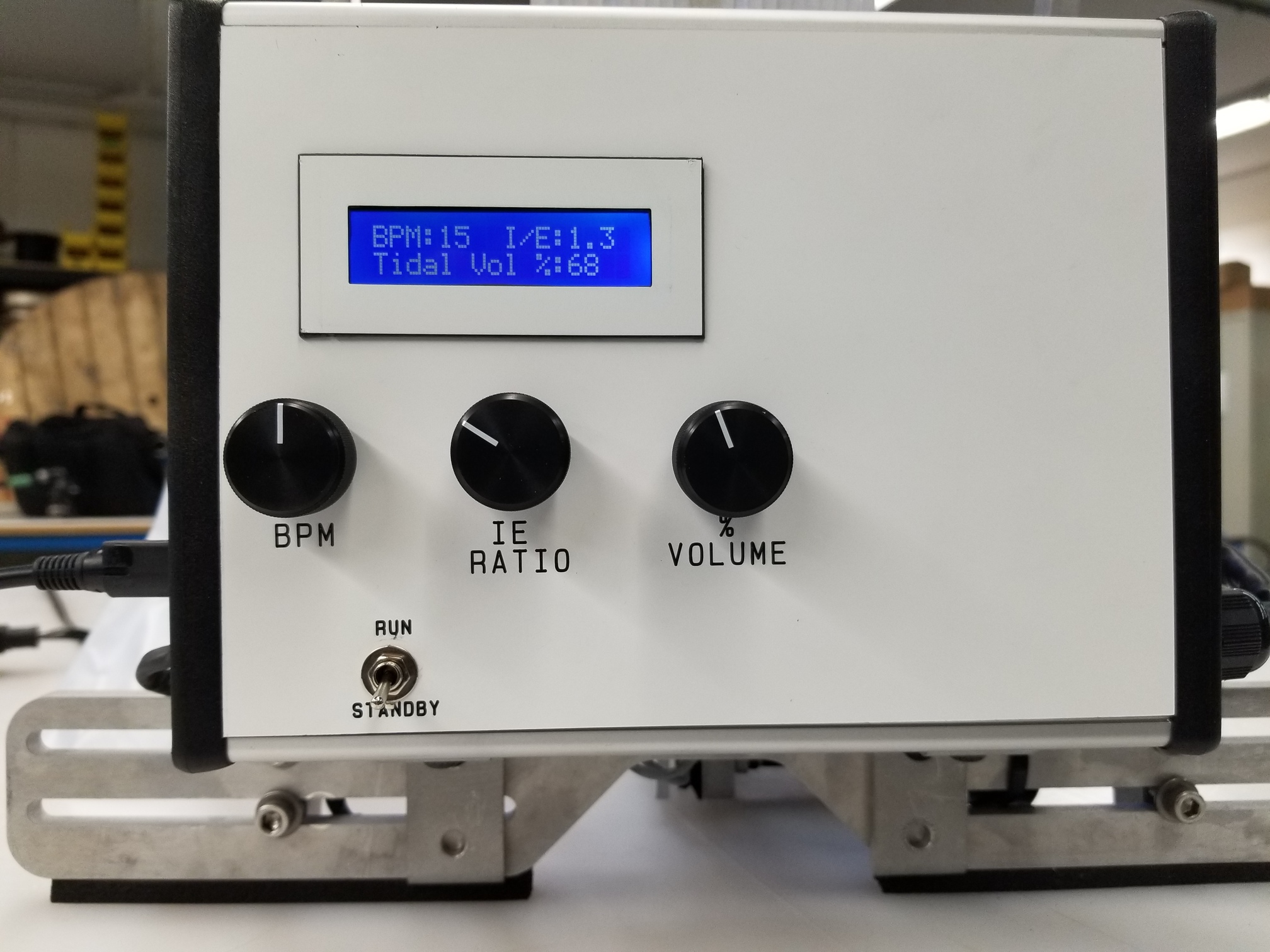 An Arduino Uno was selected as the microprocessor controller primarily because of it’s abundant supply, ease of use and robustness.

Custom code was written initially by UofT, rewritten by Promation and finally reviewed, revised and tested by Alithya (Matthew Humeny - Matthew.Humeny@alithya.com). Note that there are some anomalies with the code that should be addressed in future revisions:

a) The limit switches were inadvertently soldered in at NC instead of NO. This was corrected using software. This should be reinstated as initially designed.

b) The rotation of the pots was reverse to correct the reverse electrical connection on the PCB. This should be correct on the PCB and the software

c) A 2nd order correction was added to the IE ratio to offset errors introduced due to the stepper losing steps at very high speeds. This needs to be fixed with hardware and software so that steps are not lost. Then the code can be reverted back as before

d) The plateau pause was reduced from 150mS to 50mS because it seemed the delay was longer than the software was set at, and it was not possible to measure the delay with the FluxMed. The plateau delay needs to be reinstated to 150 mS.

e) Although an alarm was connected, it was not programmed in. Alarming would be good to add.

f) The current code does not allow changing of bags that have a dramatic diameter difference from the Carestream BVM used at TGH. This feature can be easily added. 2 DIP switches (allowing for 4 different, DIP selectable bag diameters)

Initial wiring was designed and done by Promation using soldered and screw connections. The general electronic design was then incorporated into a custom PCB designed by Laveer Engineering (Jeff Hulcoop - jhulcoop@laveer.ca). The current board has several fixes required (the 16 pin connector needs to be rotated 180deg., and the standby/run switch needs to be pulled to ground instead of +5V. The three pots are wired backwards [fixed with software))

The entire unit is power by a Delta medical-grade power supply rated for 24VDC and 90W. This power supply has a robust locking plug which prevents removal without pulling back the plug jacket first (ie. tugging on the power cord will not disconnected it).

The display used is a 2x16 LCD, although the device was initial designed for a 4x20 LCD. Subsequent versions should revert back to a 4x20 display which is easier to see and can display more information simultaneously.

Electromate (Alex Werner - alex@electromate.com) worked with Applied Motion engineers to select and configure the appropriate industrial grade controller and stepper motor. The controller used is an STR4  (https://www.applied-motion.com/products/stepper-drives/str4). The controller is operating in 200 steps per rotation smooth.

The industrial grade stepper motor is an Applied Motion HT23-601 (https://www.applied-motion.com/products/stepper-motors/ht23-601). It was connected in the bipolar parallel configuration, and the controller motor type was selected as type 8.

Some efforts were made to minimize the potential ingress of liquids into the enclosure and components. The potentioment shafts were sealed using rubber seals, and the LCD display was sealed with RTV sealant. The enclosure itself is relatively moisture resistant. With prolonged exposure to moisture, it is expected that electrical connections will corrode and this device will cease to operate properly. There is not concern about electrical shock because the device runs entirely on 24VDC, with a power consumption of well below 90W. The power supply itself is sealed and medical grade.

This prototype device is guarded on both sides of the drive train with lexan shields, although pinch points do remain on this device. A resuscitator bag should never be installed or removed unless the arms are retracted and in the standby position, or if the power is physically disconnected from the device.

In the unlikely case that the controller locks up, unplug the power supply from the device, and reconnect it. This will reset he microcontroller.

The initial design was based on the MIT E-vent geared design. Prototype #1, like the MIT design, did not take into account the significant mechanical loading generated by the resuscitator when under full ventilating load (30BPM, 1:3.0 IE, 100% Vol, PEEP at 30cm H2O, 2 HEPA filters, plus the resistance/compliance of a test lung).

Version 2.1 has undergone bench testing with a mechanical test lung as well as in-vivo animal testing. After REB approval, an 80Kg Yorshire Pig was fully anesthetized and ventilated for 2.5 hours at a range of settings: PEEP 0-10; VT 200-800 ml; RR 5-30. The device performed consistently over the full range of these settings. Effectiveness of ventilation was assessed by spirometer Fluxmed GrH and arterial blood gas monitoring. Testing data will be made available in the repository after review.

The device has not been used clinically and there is thus no human data available.

The project was initiated in Toronto in April 2020 during the COVID-19 pandemic. It builds on the concept originally created by the MIT E-Vent Team. A collaboration between the Lynn and Arnold Irwin Advanced Perioperative Imaging Lab at University Health Network, Promation, University of Toronto Faculty of Applied Science & Engineering and Mackenzie Innovation Institute